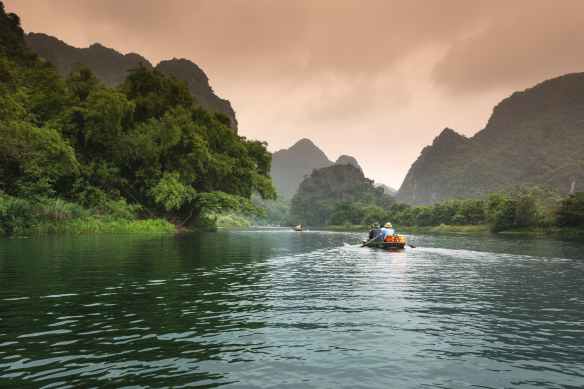 Planning for an adventurous river trip for the past six months, Pete joins his long-time friends Randy, Bill, and Fred.  The men have been looking forward to floating the Little Gulch River, and their expectations run quite high to enjoy a fantastic time.  All of them have floated this river before except for Fred, who will travel this river (or any river) for his first time.

For this time of the year, the river is running extremely high with an unusually swift current.  The local people have never seen the Little Gulch so full at this time of the annual spring run-off.

Twenty years ago, the sometimes treacherous river took the life of a careless fisherman.  The novice angler stood up in his small boat, and his poor balance sent him into the rapid-moving water.  With no help nearby and lacking a life vest, the old man was no match for the Little Gulch.  He perished quickly!

The excited river floaters plan to use Randy’s large eight-man rubber raft.  It will offer plenty of room for all of the fella’s supplies . . . extra life vests, paddles, a cooler filled with a delicious lunch, a few bags of salty and sweet snacks, and beer.  Randy’s water-worthy craft is large enough to handle any of the challenges that the Little Gulch brings their way.

As the “captain” of their vessel, Randy is an experienced river man.  He has floated the Little Gulch numerous times, and he is intimately familiar with most of its twists and turns.  The rest of the crew will depend on Randy’s expertise, more than they can ever imagine on this fateful day.

This day’s journey begins early in the morning at Sleeping Bear fishing access.  Few river travelers begin at this point along the river.  This section of the Little Gulch is only floated by the most experienced and skilled boaters and their sleek and stable river crafts.  Confident in his skills and vast experience, Randy looks forward to a routine, uneventful, and safe trip.

Bill looks forward to today’s trip as he enjoys floating the river with Randy and Pete.  The men have known each other since high school, and they have managed to stay in touch throughout the past several years.  These days find them separated by hundreds of miles, but the Little Gulch will provide a scenic backdrop for an exhilarating reunion.  Yes, exciting may not be a strong enough word to describe what awaits the men on their journey down the tricky and sometimes devious river.

The entire day looks to be sunny and warm.  The river’s temperature will be chilly, but it will keep the guys’ six-packs of beer cold in order to quench their thirsts later at lunchtime.  At the bow of the raft, Randy has cleverly secured ropes to safely transport and chill the cans of brew while they remain slightly below the water line.

Pete, having been on the Little Gulch just a few times, is not as experienced as Randy or Bill.  His experience may come in handy at a critical moment today, especially his skills as a competitive swimmer from his high school days.  Somewhere at his home, buried and nearly lost in an overflowing hallway closet, lies a small box with a cache of swimming medals.  Almost forgotten are these achievements!

The guys set out on their adventure.  They expect to have a marvelous time as the raft moves swiftly downstream with the river’s strong moving current.  Randy’s itinerary provides for a mid-day lunch (remember the chilling beer) at an island on the river.  In checking his map, skipper Randy expects the stop to be perfect for food, beer, and a bit of rest.  Over 30 miles downstream awaits the small town of Clifton and the arrival of the fun-loving foursome on board.

The last member of the boat’s crew, Fred, is floating the Little Gulch for his very first time.  With some reluctance, Randy has offered Fred an opportunity to make the trip.  He will replace a much more experienced river man, Mark, who is laid up at his home with a broken arm.  A recent tumble from a ladder puts Mark on the bench for this trip, and Fred is thrilled to be taking his place.

The river cruising quartet enjoys the bright sun and a gentle breeze.  The large rubber raft will likely make a speedy trip down to Clifton.  The men plan to eat dinner at a tasty steakhouse before driving Bill’s old, beat-up pick-up truck back to Randy’s brand new beast of a truck, which has been left at Sleeping Bear.  After loading the raft and supplies into Randy’s truck, Randy and Fred plan to stay overnight in Clifton while Bill and Pete will drive all night to catch an early morning flight back to their separate homes.

As the oversized boat journeys downstream, majestic cottonwood trees line the river bank.  The guys relive past stories and throw out a few new jokes.  The sun is heating up the raft’s surface, and Fred feels thirsty.  Sitting at the bow, he slyly pulls a cold beer from the chilly river water.  Nature provides a perfect way to keep these barley pops cold, and Fred intends to enjoy a few.

The story continues . . . stay tuned for the next chapter when “Disaster Strikes.”

8 thoughts on “Panic on the River: Friends Join Up”